Fishing is one of the most diverse sports in the world and there are simply too many methods of fishing to list them all. We will cover the basics of 4 methods and concentrate on float fishing in this guide as it is the most successful and universal way to fish.

Pole fishing is the use of a fixed length of line on the end of a pole. Poles can come in different lengths, up to 16 meters but the length of line with float/weights and hook attached (the rig) is generally kept to 2 meters in length.

Because of the short line it means that full control is maintained at all times and provides superior presentation to other fishing methods. However it can be difficult to land larger fish due to the restricted length of pole and line used.

The fishing principles are the same as Rod and Line – Float Fishing so you can find more details on how to pole fish below.

Float rods are usually around 3 meters in length, have reel attached about ¼ the way up the length of the rod. The reel will be loaded with line that can be wound in using the handle or let out by opening the bail arm. The line is then passed along the length of the rod through its eyes and out of the tip ring. This means that you can fish as far as you can cast the rig and when hooking a big fish, line can be let out to prevent the line from breaking and then the fish can be played until it has tired out before landing it.

Float rod fishing is usually the second method used after pole fishing, this is due to the addition of the reel, which for inexperienced anglers can lead to a lot of tangles; the secret is to keep the line tight at all times when fishing and not rushing things.

This guide is aimed at lake fishing, we would therefore select a “Waggler” type of float – for flowing water we would select a stick float for short distances or a waggler for long distance fishing. There are lots of different floats for different situations, here are 6 common types: 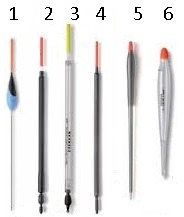 For lake fishing a Waggler will be setup like this: 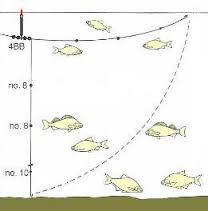 With the use of a plummet we can map out the lake bed and then once we have decided where to fish we can then set the depth as below: 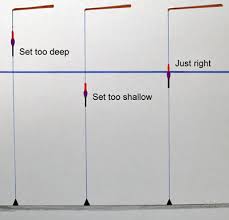 When using a rod and reel we have the advantage of being able to let line out when we hook a big fish that wants to swim away. All reels have a drag system (some on the front and some at the back) the drag system should be set so that line can be pulled off the reel before the hook length is broken. Hold the rod in one hand and the hook length in the other. Now put a bend in the rod to the desired strength, if no line comes off the reel then the drag needs to be loosened, if line is pulled off too easily then the drag will need tightening. Repeat this process until you are happy that the drag is functioning correctly.

Once the drag is set there will be no need to adjust it again unless you change the breaking strain of the line used for the hook length.

Being able to cast accurately to the same place every time is an essential skill that will mean you catch more fish more quickly.

You will develop your own casting style but the basic principles are as follows:

I have a Bite!

When the float dives under the water or moves strangely or even bobs up and down; this means a fish is either trying to eat your bait or already has the bait in its mouth.

Lift the rod up smoothly and apply pressure to the fish (do not strike aggressively; this will just lead to tangles).

If you do not get a bite after a minute or so, reel in, change your bait then cast out again. Often just twitching the float gently can encourage a fish to take your bait. Sometimes fish play around with the bait, in this case you will seem to miss lots of bites; try waiting for a moment until the float has gone fully under, this gives them time to take the bait properly.

Once you have pulled into the fish you need to quickly assess if it’s a big fish, medium fish or small fish. A big fish will usually hang deep in the water and slowly/powerfully move in one direction. Smaller fish will swim around frantically in any direction.

Small fish can usually be bought to the surface quickly and then pulled out. Larger fish need to be given time to tire before landing using a landing net.

A swim feeder is a small container that is attached to the line which can hold bait to attached fish into an area; it is fished on the bottom with a baited hook near to it. No float is used; instead the tip of the rod is used to detect bites.

Feeder rods have a sensitive tip that will show up bites by movement of the hook which in turn pulls the mainline which moves the tip. The feeder rod needs to be in a rod rest and remain still so that bites are easy to see:

Feeder fishing is a good method for fish actively feeding on the bottom where a static bait is preferred. Feeders can also be cast a long distance due to their weight and are therefore preferable over the float rod in these circumstances. Feeder rig:

Ledger fishing is similar to feeder fishing but with the use of a ledger weight instead of the feeder. Used to cast much further distances and in situations where you do not want a feeder in the swim as they can make the fish warry. The weight also acts as a self-hooking rig meaning the fish hooks itself when it picks up the bait.

Bite Alarms are commonly used with bobbins to detect line movement and also to allow night fishing. This is the main method used to catch Big Carp.

Back to Basics – Tackle!

How to Setup a Pole Rig 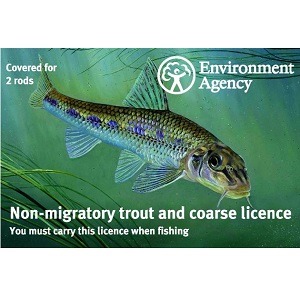 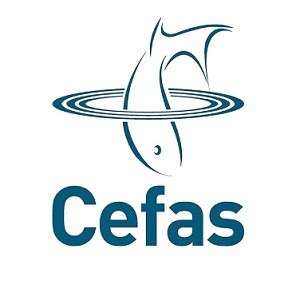 Mill Farm Fishery - Credenhill
5.0
Based on 16 reviews
powered by Facebook

Stephen Roberts
2021-09-09T13:29:31+0000
We had a lovely days fishing at mill farm. Loads of Bream and carp. Nice big swims. Easy fishing after 2 days on the... mighty Wye. Can get a bit noisy being next to the SAS training area but that was exciting too!! Picnic benches. Loads of chickens wandering around. Dogs on leads allowed. All bait produced decent fish. For a commercial fishery it was very pleasant. Apparently there are 13lb plus bream to be had. Our largest was about 4lb but we were pleased with that. 👍👍read more